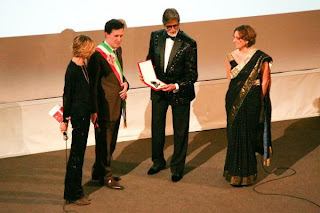 La foto del giorno - Il leggendario Amitabh Bachchan riceve le chiavi della città di Firenze in occasione della sua partecipazione al River to River Florence Indian Film Festival 2012 (per saperne di più: clicca qui). Big B ha scritto nel suo profilo Twitter:
6 dicembre: 'Into the magnificence of Firenze, Florence, Italy. Every corner and nook blessed with history and art and culture and style! More interviews and photo shoots. La Repubblica and then Uomo Vogue. Stunning pictures by ace photographer. Beauty in simplicity'.
8 dicembre: 'The Deputy Mayor of the City of Florence, presents me with the keys of the city. No longer a tourist now, but a guest! Honored! The fashion and design at every step is so infectious! You feel like spending a lifetime here. How do they do it? The cobbled streets, the old palaces, the squares... all maintained in its original form through ages. What magnificence!! Every shopping arcade, restaurant, office, Hotel, part of the lustrous palaces that existed. Not a stone changed, yet still in style. Last night Deputy Mayor of Florence presented me with the keys of the City. So honoured! Tonight Black and a Q&A with audience'.
9 dicembre: 'A standing ovation amidst shouts of 'bravo' for screening of Black. Here in Florence for R2R film fest. Thank you Sanjay LB. Walking the streets in Florence, biting cold, well clad, but the warmth coming from the ones that follow. Surprising, and humbling. A full house at the Odeon, Florence. In the Q&A a lady with the same symtoms as the girl in Black crying copiously!! Good bye Florence. It was a most enjoyable trip. The honor, the pride that Indian Cinema is attaining is a win for India'.
Anurag Kashyap l'8 dicembre ha scritto nel suo profilo Twitter: 'Big B was awarded "Keys to Florence" tonight and then there was an Italian flashmob dancing to a medley of Amitabh Bachchan songs #awesome'. 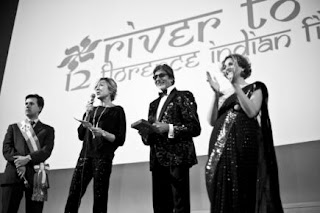 6 dicembre: 'Each corner of this beautiful city speaks by itself, its glamour, its social standing, its arts and culture and of course the exquisite construction that it enjoys; fairy tale like in its appearance and demeanor, prompting a visit perhaps again with the grandchildren to those regions and areas that we were unable to see or talk about. Perhaps Abhishek shall be greatly more enterprising with Aaradhya. (...) Interviews and photo shoots took most of the afternoon away. But I have to say this. The French and the Italians are masters in their respective arts, and here in Italy the labor is working away, so the burden of responsibility shall fall on us, irrespective of the result. Not talking about any thing in particular, but just that the magic of shopping always takes center stage. Not for me. But for the photo shoot that is to follow soon. The La Republica newspaper, the largest in the country and the Uomo Vogue, spend time and energy to talk of the reveal, and reality of cinema. The dress outfits - a combination of personal and what they brought along is looked after. And some stunning photography takes place by the greatest in his profession and the country. And then resourceful attending staff from home, sets up the dining table with… yes you guessed it, Indian food!! In the heart of the finest eating regions of the world, and we ask for Indian! In matters of food, buddy there can be no winner… its only Italian'.
7/8 dicembre: 'Overwhelmed as I am with the beauty and elegance of Firenze, the opening of the River to River 12 Indian Film Festival tonight at the Odeon Cinema, one of its oldest is a delight to be present at, where the Deputy Mayor of the City, with his designated sash or ribbon of honour around his shoulder, presents me with the keys of the City of Firenze, and invites me to the city again not as a tourist but as a guest. Nothing could have been more overwhelming than this recognition, in the presence of the Ambassador to Italy of India and other distinguished guests. Firenze or in popular English, Florence, has a quiet elegance about it. Well… that is an inappropriate description, for, elegance is always quiet. Its seeming simplicity is what eventually is its most enduring complexity. It is not a book to be judged by its cover. It requires for one to stay a while, walk about on their own and finally discover that there is far more to it that was originally contemplated. A city of exquisite beauty in its museums and galleries, of history and geography and in just the simple way that the inhabitants of this enviable place, live and enjoy the pleasures of life. Pleasures of life? Yes because as one moves about the narrow cobbled lanes, entering old Palaces that have now been converted into meeting places, restaurants, theatres, shopping malls, one realizes that a city of such eminence needed to be preserved in the way it is'.
8/9 dicembre: 'Cobbled streets, old period palaces of families that lived and became its prestige, a cold winter breeze through the hair, body protected well with padded jackets and scarfs, mingling with the Saturday market crowds of Firenze in the main square… just a grand feeling of being free and independent and like any other, for once!! A small quiet and unassuming looking restaurant in one corner of the city, Italian delicacies beautifully presented, sparkling water of the brand Pellegrino and stimulating conversation with the festival organizer of River to River Indian Film Festival, marks the end of the afternoon, before the main event - Black at the show at the Odeon, the aged film theatre built like an opera house, astonishingly well kept and in sane condition. Gifts galore pour in as the local community gathers my presence, and then to the opening of the first presentation… It is a full house and it looks attractive. After a brief interaction to introduce the film, mob commotion, and shhh’s of silence, the film begins. Many who have had some experience as a viewer or hearer of Indian Films, move about speak loudly, almost as though they knew what was coming… but within a few seconds into the first frame, a silence pervades, and remains so till the last credits. When the lights come on the audience stands and applauds for long… long enough for me to walk up back on to the stage for a Q&A. It is quite overwhelming. Amid shouts of ‘bravo’ I stand before the audience and for long take in the applause. Applause…? The company that has interest in the film and in its distribution is also called Applause… so every time in the opening credits when the word drifts by, the obedient audience breaks into a clap… ha ha ha cute!! Its like those q-boards at Tv shows, when a large sized card is held up to tell the live audience in the house to clap their hands!! (...) In Italy, moreso, I discover, it is expected of everyone to be dressed as though they were on the fashion ramp of some of the prominent parades that take place. Everyone is designered to an elegance that makes me wonder, where and how on earth did all the beautiful, aesthetic, and poetry laden style, get to those that occupy the ‘boot shaped’ outline… What happened to these European states that they became this epitome of all that seemed elegant? Art, architecture, living and so many other aspects… all became the reference point for design. And as you walk down the streets enjoying the moment, you cannot but marvel at this phenomena. What took place in this part of the world that set them off to explore and conquer, to be different and experimental and to be welcomed as guests that finally turned out to be a dangerous welcome to wherever they went…'. 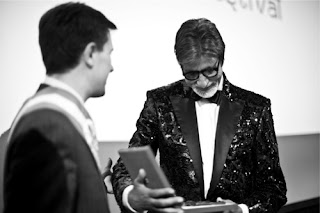 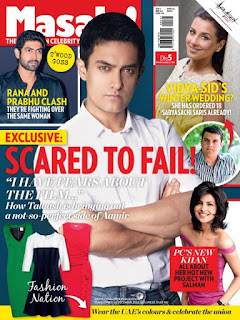 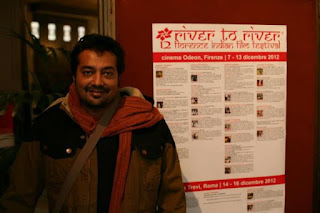 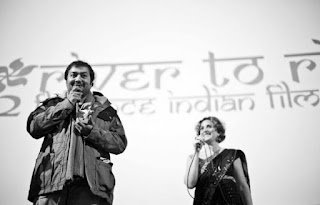